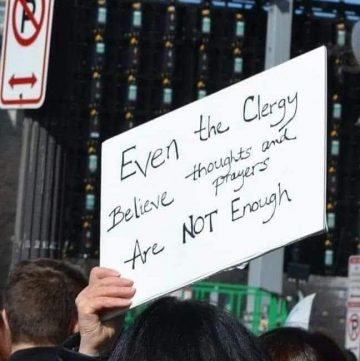 This past week, as I sat in the grief of another mass shooting, this time in Robb Elementary in Uvalde, TX, I once again saw a similar argument on my social media feed. As people mourned the violent massacre that took the lives of 19 Latinx children and two teachers, I saw some people offer their “thoughts and prayers,” and others insist that prayers are not what is needed, rather we need (they insisted) immediate changes to our policies.

Sadly, prayer in our culture often becomes the end of action, rather than just the beginning. Prayer, as people point out, becomes as a way of feeling like we did something about pain in the world, rather than actually doing something that helps bring change. But what if prayer was meant to be so much more?

I actually find this popular form of prayer not only a disservice to those who are most hurt in our world, but a disservice to the real intent of prayer. For prayer is supposed to open us up to a God that will ask us to take action (through voting, organizing, and acts of compassion) and live in a way that helps our prayers for justice to become a reality in our communities.

I am reminded of the words of Oswald Chambers, “To say that ‘prayer changes things’ is not as close to the truth as saying, ‘prayer changes me and then I change things.” May we open ourselves up to the God who is with us in the heartache of this world and is transforming us into agents of God’s love in action.

Posted in News
← Between Grief and JoyBuilding a Church Without Walls →